If you’re flying through Atlanta, you might want to keep both hands on your laptop.

According to data gathered by Code 42, a backup/data management company, Atlanta’s Hartsfield-Jackson has the highest frequency of laptop thefts in the U.S. Miami International airport came in 2nd, followed by Chicago’s O’Hare International Airport.

This is bad news for the millions of Americans who travel with their laptops. Seriously, how are you supposed to get through a long layover if you can’t watch “Frozen?”

And it looks like a stolen laptop stays gone. Code 42 concluded that 97% of stolen laptops will never be found. How depressing. 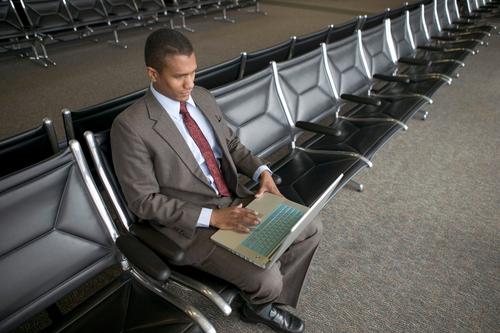 Keep your laptop close to you while flying this holiday season. (Thinkstock)

The study also found that a laptop is stolen every 53 seconds. That translates to 1,600 stolen laptops a day and countless stolen data. In fact, the average consumer stands to lose $342 on replenishing multimedia purchases alone if their laptop is stolen. So, what do you do?

First, and this goes without saying, don’t leave your laptop unattended. If you’re grabbing a quick coffee at Starbucks while your laptop charges, take it with you. No skinny low-fat latte is worth losing your Macbook.

And finally, it’s not a bad idea to back up your computer before you hit the road this holiday season. Take a moment to store your photos, music, and data in a service like icloud, Google Drive, or Code 42. This way, if the unthinkable happens, at least you won’t lose your entire digital life.

Airports with the highest frequency of laptop thefts:

So, do you still think it’s okay to step away from your laptop, even for a brief moment? Or, here’s the best one: asking a complete stranger to watch your belongings while you run to the bathroom or go grab something to eat. Really? REALLY?! Wake up, People! You spent your hard-earned money to buy your laptop, so start doing more to protect your investment!

What are your thoughts?

Brittany Jones-Cooper is a reporter, producer, and writer who has contributed to CBS News, The Daily Beast, Nike, and Today. She also spent an exciting two years as an associate producer for Katie Couric’s daytime talk show. Brittany hails from Nebraska (Go Huskers!) and loves blogging, jaywalking, yoga, and binge watching mediocre television.

Build your business success around something you love and cherish…something that you are truly passionate about and that is intrinsically exhilarating.